Give the gift of hope this holiday season. Order your Loaves & Fishes/Friendship Trays  holiday cards here.

Nonprofits Band Together to “Make the Pie Bigger” – by Kelly West, AuntBertha.com 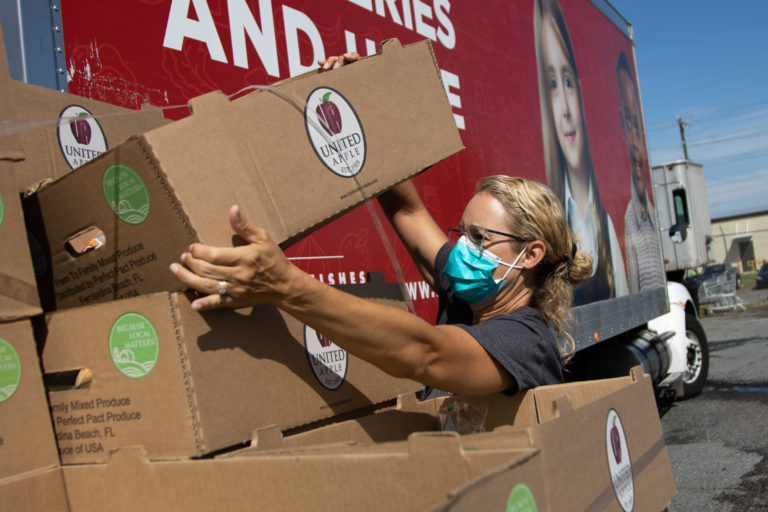 It was several months into the nationwide shutdown due to COVID-19, and Tina Postel had completely shifted operations within the largest emergency food pantry network in Charlotte, North Carolina. As executive director of Loaves & Fishes, Postel had to close down 41 brick and mortar pantry locations and switch to mobile curbside service overnight.

But operating 20 mobile pantry locations across the county, with multiple distributions every week, Postel found herself short on cold storage to keep perishables fresh.

She mentioned it to her longtime friend and colleague, Kay Carter, who serves as CEO of Second Harvest Food Bank of Metrolina. Carter had a refrigerated tractor trailer delivered to Postel’s warehouse the next day.

That collaboration includes a third leader in the region’s food access network: Rosanna Saladin-Subero, Director of Community Partnerships and Family Engagement for Charlotte Mecklenburg Schools (CMS). The three women represent the three largest food organizations in the city, and they started meeting once a week right after the shutdown.

Rosanna Saladin-Subero says CMS has increased the number of referrals they make to Loaves & Fishes by training additional staff to refer students and families to the food pantry network. [Photo by Kelly West]

“It’s only an hour a week,” says Carter, “but what we’ve been able to do has helped our community significantly.”

Before the pandemic, North Carolina ranked 10th in the country in terms of food insecurity, with an overall food insecurity rate of 14 percent. Feeding America predicts the pandemic could raise the rate in Mecklenburg County to 17 percent this year. But Postel, Carter, and Saladin-Subero have already seen an enormous increase in the need for food from their respective organizations, in some cases triple the number of clients, which is why they made a concerted effort to work together.

The group swaps schedules and upcoming plans, discusses problems they’re having, and shares ideas about how to pool resources, prevent duplication, and fill in gaps. If a zip code isn’t being covered, who can take it? If one organization is reducing service, who can pick up the slack?

When CMS closed down for one week to transition from the spring semester to the summer food service, Second Harvest opened additional mobile pantries at the schools. The week leading up to the closure, the school district intentionally referred families to the Loaves & Fishes pantries, where they could get a week’s worth of food while school meals were unavailable.

Wendy Lenhof loads a truck with food supplies that she and other volunteers with Hope Street Food Pantry purchased from Second Harvest Food Bank of Metrolina to distribute to their clients. The food bank offers food at a reduced cost of pennies on the pound to local pantries like Hope Street and Loaves & Fishes. [Photo by Kelly West]

In addition to food, the group coordinates financial resources as well. When United Way of Central Carolinas and Foundation for the Carolinas launched a COVID-19 Response Fund, Postel reached out to Carter. She said she could avoid requesting money for food if the food bank would continue to provide a guaranteed number of boxes each week.

Carter agreed, and her organization applied for food-support funding, while Postel sought money for additional staffing instead, benefitting both groups and the overall effort to feed those in the region needing assistance.

“We’ve gone out of our way to communicate not only to each other but to major foundations that we are working in tandem,” says Carter. “Funders want to know that duplication is not occurring.”

Postel acknowledges this is unusual in the nonprofit world because groups are typically  competing for the same limited resources. “There’s enough hungry people to go around,” she says, “and it’s not about you stealing my piece of the pie. It’s like, let’s talk about how to make the pie bigger.”

These three leaders have been working together for years, so the relationship between them is not new, but the intentional effort to collaborate through a crisis has made a significant difference in their ability to serve the community.

“We already had established relationships. We didn’t start from scratch,” says Saladin-Subero. “That’s why it’s important to build relationships, not just when you need it.”

Charlotte struggles with more than issues of food insecurity. Despite being one of the fastest-growing cities in the nation, it ranked dead last in a study that analyzed economic mobility in the 50 largest cities in the U.S, meaning it’s nearly impossible for residents living in poverty to gain financial security.

Poverty and economic mobility, just like food insecurity, disproportionately affect Black and brown communities, and part of Postel’s role is to advocate for policy change around these issues.

“There’s a lot of systemic change that needs to happen here in North Carolina,” Postel says, “and that starts with legislation and addressing the racial inequities and system inequities that are just so prevalent here in our state.”

Kianna Lõpez, 13, left, and her sister Adriana, 14, carry watermelons to load into a vehicle during a drive through food pantry organized by Loaves & Fishes at Camino Community Center, another nonprofit that the pantry network partners with. The sisters were volunteering at the community center’s food pantry, which has served the neighborhood for 10 years. [photo by Kelly West]

Postel says joining forces with other organizations, as she has with Carter and Saladin-Subero, is a step in the right direction.

“We need to do more collaboration. I think there are a lot of nonprofits that cooperate with one another. But true collaboration is tougher,” she says. “We should be doing that with every organization. I can’t tell you how many little churches around town have started doing food collections in their own pantries and things like that, instead of us working together.”

Both Postel and Saladin-Subero see food needs in the region beginning to level off, but they have no plans to end their weekly meetings. The pandemic is unpredictable, and no one in the group is under any illusion that the crisis has passed.

Besides, the collaboration isn’t just leading to more effective food distribution, it’s a chance for the group to bond over a shared goal. “We’re good friends and we work together all the time,” says Carter, “but I do think it’s brought us even closer.”

Top photo: Tina Postel grabs a box of food to load into a vehicle during a mobile pantry drive at Camino Community Center. Postel prefers to organize multiple smaller pantry drive throughs, rather than one enormous one which has the potential to create panic. “We want to make it as seamless as heartwarming as you possibly can,” she says.[photo by Kelly West]