Lathan is 5 years old and a kindergartner in CMS. He is the artist behind this year’s new Loaves & Fishes’ Holiday Card. Lathan lives with his grandmother Della, who has raised him since he was a year old. Della recently lost her job and even with Medicaid and Medicare, she does not have enough money to pay the bills and buy groceries. She was grateful to visit a Loaves & Fishes pantry and choose nutritious groceries to prepare meals for Lathan and herself. While waiting, Lathan drew the snowman featured on our new holiday card. He was also happy to pick out his own cereal – cornflakes! 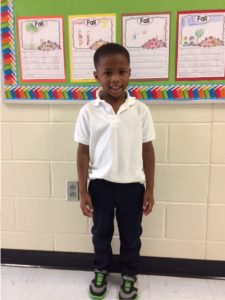 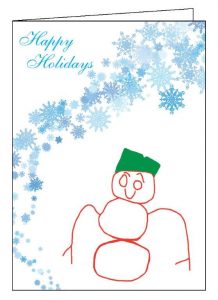 You can order Lathan’s card (his photo and story appear on the back of the card), or choose from two other designs.

Honor the special people on your holiday gift list by putting groceries into the homes of neighbors like Lathan with a donation to Loaves & Fishes. It’s so simple, yet so meaningful.

MORE NEWS >
previous post: A Journey For All of Us – Devonne’s Story
next post: I AM A DENTED CAN… Confessions of a Flawed Giver