North Carolina Ranks In Top 10 of Hungriest States in U.S.

North Carolina ranks in the top 10 but it is nothing to be proud of. 15.1% of NC households experienced food insecurity in 2016. An article in USA TODAY shares the findings from the USDA’s latest food security report. Read the article here:

As many Americans settle into fall with pumpkin delectables, a substantial number of families in the U.S. are not sure where their next meal will come from.

Bread for the World, an anti-hunger advocacy group, has released a list of the 10 hungriest states in America based on data from the USDA’s latest household food security report: North Carolina, Oklahoma, Indiana, Maine, Kentucky, Arkansas, New Mexico, Alabama, Louisiana and Mississippi.

Mississippi is at the very top, with 18.7% of households struggling to provide enough food for family members at some point in the year. Louisiana is a close second, with 18.3%.

“Families run out of food sometimes,” said David Beckmann, president of Bread for the World. “They’re not hungry all the time, but if they run out of food at the end of the month, they are more likely to scrimp on food during the month.”

He said such hard-pressed families tend to buy food that is cheap and filling, but not necessarily nutritious.

Food insecurity impacts infants and children in a particularly significant way, according to physicians and public health experts.

“Their brains are developing,” said Arvin Garg, a pediatrician and associate professor of pediatrics at Boston University School of Medicine. Not having consistent access to nutritious food puts children at risk for health issues like iron deficiency, he said, which impacts brain development. That, in turn, impacts school performance. And as the majority of these families are struggling financially, poor school performance makes it more difficult to escape the cycle of poverty.

Food insecurity prevalence is lower now than it was just a few years ago. The percentage of households struggling with access to food nationally spiked in 2008 with the recession, rising slowly to 14.9% in 2011. Since then, that number has been falling slowly, though it is still higher than in the pre-recession days of 2007, when it was 11.1%. 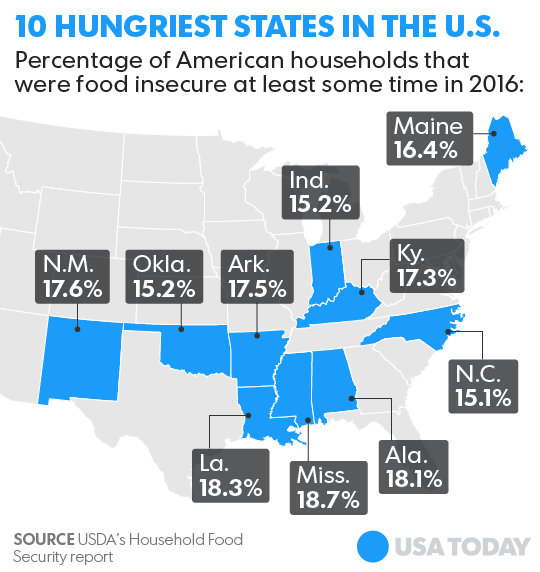 According to the USDA, 12.3% of American households — 41 million people — experienced difficulty providing enough food for their family members due to a lack of resources in 2016.

“We have some of the best social infrastructures in the world to deal with food insecurity,” said John Cook, principal investigator of Children’s HealthWatch, a network of pediatricians, researchers and policy experts who research how public policy changes affect the well-being of children. He cited the Supplemental Nutrition Assistance Program (SNAP), the Special Supplemental Nutrition Program for Women, Infants, and Children (WIC) and school feeding programs, which “work so well when they’re funded.”

The problem, Cook said, is money. “Every year, Congress tries to minimize funding for these programs,” he said.

And as lawmakers are now considering cutting $10 billion from agriculture programs over the next decade, advocacy groups fear that most will come from SNAP, also known as food stamps.

“There are a lot of evils in the world that are hard to solve,” said Beckmann.  With the country’s vast resources, he doesn’t think food insecurity in the U.S. should be one of them.

“In America we don’t need to have millions of kids who aren’t eating all the time,” he said.

Hello To New Beginnings – Loaves & Fishes/Friendship Trays Summer Newsletter
Saying Goodbye to Distribution Street and Hello to New Beginnings by Elizabeth Leland
Congratulations to the Winners of the 2020 and 2021 Virginia Sampson and Beverly Howard Awards
Turn Your Victory Garden into a Giving Garden
The First Full Day as Loaves & Fishes/Friendship Trays and What a Day It Has Been!
LOAVES & FISHES VOLUNTEERS PROVIDE FOOD ACCESS DURING PANDEMIC