Executive Director of Loaves & Fishes, Beverly Howard To Retire in 2016 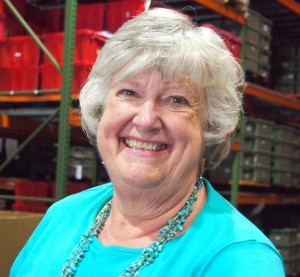 After 27 years of fighting hunger and poverty in Charlotte-Mecklenburg, Beverly Howard has announced she will retire as Executive Director of Loaves & Fishes in June 2016.

Under her leadership as the agency’s second executive director, Howard has guided the emergency food pantry program into a national model, serving as the largest pantry program in North Carolina.

At the height of the recession in 2012, that number peaked to a record 126,803 people fed. At no time during those 27 years, has a single person been turned away due to lack of food.

“Beverly has been a community leader in the fight against hunger and poverty.” says Carol Hardison, Chief Executive Officer of Crisis Assistance Ministry.  “Her compassion and vision remind us daily of a life sustaining need — food.  Beverly shines a light on the fact that all people deserve access to good nutrition.  Her dedication and commitment have made a significant difference to people experiencing the crisis of hunger.  Thousands upon thousands of people are happy and healthy because of Beverly Howard.”

Howard has served as a resource outside of the Mecklenburg community as well. She has mentored countless representatives of organizations who have travelled to Charlotte from all over the United States to learn from her how to replicate the Loaves & Fishes model in their own communities.

Always putting the dignity of clients first, in 2011, Howard brought a new model to Loaves & Fishes called Client Choice. Instead of receiving a pre-bagged supply of groceries, clients are provided a grocery store experience, choosing from a nutritionally balanced shopping list the foods they know their families will eat, promoting dignity and cutting down on waste.

“The Charlotte-Mecklenburg community has been the beneficiary of almost three decades of selfless and dedicated service by Beverly Howard to those experiencing a short term crisis,” said Loaves & Fishes’ Board Chair, Tim Klund.  “It has been an absolute honor and pleasure to have the opportunity to work with her over the past few years and watch a skilled people-person work. She never loses sight of the needs of others and the place that Loaves & Fishes has in the social services network of humanitarian aid. When Beverly leaves for retirement next year, she will leave an organization well situated to face the challenges of the future.”

During today’s announcement to the Loaves & Fishes board of directors and staff, Howard noted, “It’s been my great joy to be part of Loaves & Fishes’ tremendous ministry for 27 years.  I am extremely proud of the passionate and skilled Loaves & Fishes volunteers and staff that will carry on Loaves & Fishes great work. I look forward to spending more time with my 11-year-old granddaughter and cheering from the sidelines as Loaves & Fishes continues to grow and serve.”

Prior to Loaves & Fishes, Howard served as the Executive Director of Friendship Trays.  A founding member of the Unity Against Hunger and Poverty group in Charlotte, Howard also served as President of the Women’s Executive Director’s Network, and as a member of the national board of the National Association of Meal Programs. She is an active member of Bread for the World and has made several trips to Washington D.C. to lobby on behalf of hungry people in this country and abroad.

Howard was the recipient of the 2005 9th Congressional District Legacy Award, the 2010 Charlotte CROP Hunger Walk Weenie Daniel Award, and was named a 2011 Women in Business Achievement Award winner by the Charlotte Business Journal.  In 2013, she received the Mecklenburg Ministries’ Community Leader Award.

“Charlotte-Mecklenburg citizens are losing an important community leader to retirement. But knowing Beverly, she will find a way to continue to contribute to community needs,” adds Board Chair Klund.

A transition team has been formed and will begin the formal search for a new director early next year.