Loaves & Fishes/Friendship Trays will be closed Nov. 24 – 27 for the Thanksgiving Holiday.

Holly and Ivy just go together.

Shopping together for a week’s worth of groceries and chatting like two old friends, Holly was showing Ivy the pasta sauce she liked best while Ivy shared which vegetables her kids liked to eat.

You would never guess they had just met. 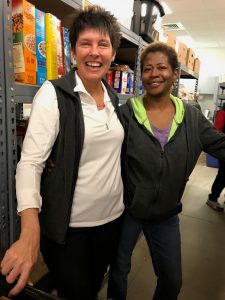 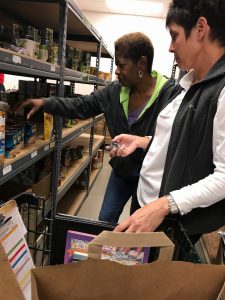 Ivy never imagined she would ever need to come to Loaves & Fishes. She had worked for 17 and a half years at a medical office in town. It was a good job that she enjoyed. After recovery from a surgery took weeks longer than expected, her job was not there when she came back. That was two years ago.

Now a single parent, the past two years have been a constant struggle for Ivy. Struggles with ongoing health issues and struggles to get her disability insurance straightened out. In the meantime, she tells Holly, she lost everything – her job, her car and recently she had to move out of her house. She has lost 60 pounds due to the worry and stress.

Then her son’s elementary school counselor referred her to Loaves & Fishes. Ivy had never been to Loaves & Fishes before and wasn’t sure what to expect. That’s where she met Holly, who volunteers every Wednesday at the pantry at Holy Comforter Episcopal.

It’s been hard on the whole family. But as she tells Holly, “I try to keep going but the constant worry and stress of not knowing… I can’t change certain things but the worry is killing me.”

One thing she does know. “It will be a relief not to have to wonder how to feed my children.” Today, thanks to you, she has a shopping cart filled with groceries and a new friend in Holly.

MORE NEWS >
previous post: Multiple Mecklenburg Human Service Agencies, Including Loaves & Fishes, Are Impacted by Cut in EFSP Federal Funding
next post: “There But For the Grace of God Go I” – 4 Tips for Raising Children Who Care